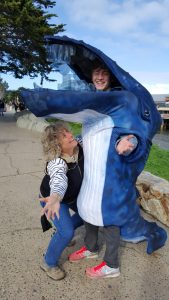 DGinPG is actually a moniker given to me locally that started as a joke. It always triggers smiles and tends to help people remember the nickname.

My real name is Diana Guerrero (aka ARKlady). Perhaps you found me through a referral, online or my local column, Ask ARKlady?

Believe it or not, my first word was, “fish” and the rest, they say, is history.

My life started near the ocean in a port town and I landed in another one on the central coast of California, where I live now.

I have identities around my interests which include the ocean, animal behavior & training, and conservation.

Ultimately, I am an adventouress spirited explorer whose entire career has involved animals and nature but that has just changed over time.

Today, in addition to work with companion animals, I provide visitors with experiences on the central coast of California. Normally we depart from the Port of Monterey or the local airport (MRY).

In the pet sitter role, I am probably the most over qualified pet professional you will ever meet. Some of my credentials include a degree in Animal Care Training & Management, Past President of the Pet Sitters Association of Southern California, and a long list of other animal specialties.

What that translates to mean is that I have a passion for animals as well as the unique skills and unparalleled experience to give them the best care and management.

Unlike a lot of folks who have a side gig, or think working with animals might be fun, my work isn’t a hobby, it is a lifelong career as well as passionate dedication to animal care and well-being.

My clients are folks who deeply love their animals and want the best care for them. They include business owners, working professionals and those who travel. They all want to make sure their animals remain content and safe in their own homes (or in a hotel or short-term rental if they are traveling).

If you know about me as the ARKlady, you might be familiar with my work with both aquatic & land animals (yes, both wild and domestic). Over the course of my life, I’ve had a few slight redirections.

The first was a serious tumble from the top of a zoo hay barn that expanded my reach a tad. You could say that I “fell” into writing because that incident pushed me into the role of a professional writer and author. And yes, mainly about animals and nature but also other topics as well.

My geek grrrl self emerged as theArkLady, a cyber-jungle trailblazer who began navigating the uncharted waters of the Internet back in 1995. Those writing skills combined with my work with animals and nature to become an educational resource online. It soon included offline publication in traditional media outlets (magazines, newspapers, radio and television).

After tragic long-term exposure to bio-toxins (toxic mold exposure), I continued to use those skills when I had to step away from active animal work during recovery.

Today, I am blending my talents in a new territory but I still work with animals in a number of ways and continue to educate others about lessons we can learn from the natural world and the animals in it.

Finally, let me share a few #G2KM tidbits. I am naturally curious and passionate about many things, so you’ll find my name mentioned in a few books such as Writing Alone, Writing Together, The Web Savvy Writer, The Man Who Predicts Earthquakes, The Solopreneur Life & The Forgiveness Handbook, and others.

In addition, I am also the author of a few traditionally published works: Blessing of the Animals: A Guide to Prayers & Ceremonies Celebrating Pets & Other Creatures (2007), What Animals Can Teach Us about Spirituality: Inspiring Lessons of Wild & Tame Creatures (2003), & contributing editor to the award winning Resources for Crisis Management for Animal Care Facilities (1999).

You may still catch me commenting in major market media (television, radio, magazines and newspapers) including a few notables such as NPR, The Today Show, Discovery, MSNBC.